In 1888, Clarence King started to lead two secret lives, one on each side of the Brooklyn Bridge.

In Manhattan, he was the blue-eyed, blonde-haired toast of the town: geologist, best-selling author, art collector and raconteur. But in Brooklyn, he called himself James Todd, a black Pullman porter and traveling steelworker.

He did it for the love of his wife, a former slave from Georgia 20 years his junior. She had no idea of his true identity until he sent her a letter from his deathbed, confessing it all.

Ada King would outlive her husband by six decades, long enough to star in a sensational courtroom drama in 1933. Long enough to watch Martin Luther King deliver his “I Have a Dream Speech” on television. Clarence King was born Jan. 6, 1842, in Newport, R.I., the son of Florence Little King and James River King, a wealthy China trader. As a boy growing up in Connecticut he enjoyed natural history and exploring the outdoors. At 13 he entered Hartford High School, where he excelled at academics and sports. Then he attended Yale, where he studied chemistry, physics and geology.

Yale would later carve his name in stone over an entryway in Branford Court.  A sculptor cast his image in bronze for a door in the U.S. Capitol. Three mountains and a lake were named ‘King’ in his honor.

As a young man, he went west – and mapped it.

At 22, Clarence King and his friend john Gardiner took a wagon train to California in search of adventure. They found it in the rough mining towns, meeting desperadoes, swindlers and vigilantes. He then volunteered for the California Geological Survey, for which he climbed for the first time several high peaks in the Sierra Nevada. The climb left him with a permanent chill, he wrote. Later King authored a best-selling book about it, Mountaineering in the Sierra Nevada.

He returned home by way of Nicaragua, where he described ‘a bewitching black-and-tan sister thrumming her guitar while the chocolate for our breakfast boiled.”

For the rest of his life, Clarence King would associate tropical warmth with relief, with rest, and with exotic dark-skinned women, wrote his biographer, Martha A. Sandweiss in Passing Strange; A Gilded Age Tale of Love and Deception Across the Color Line.

In fact, Clarence King believed that America’s hope lay in mixing races and ethnicities. “Miscegenation is the hope of the white race,” he once said. For the next decade and a half, Clarence King explored and mapped vast tracts of the American West with an eye toward its mineral wealth.

Late in 1864, Clarence King and John Gardiner mapped the boundary of Yosemite after Abraham Lincoln declared it a national reserve. Then they surveyed the Mojave Desert and Arizona.

Clarence King’s next adventure, though, won him international fame. He was exploring the West for the five-year Fortieth Parallel Survey when in 1872 two con men came up with a simple ruse.  They acquired some industrial grade diamonds and began showing them around as evidence that they had discovered a major diamond mine. As word spread, investors jumped aboard. Clarence King found the so-called diamond mine and exposed the diamond hoax.

Once he finished the survey, he published a book titled Systematic Geology, described as ‘one of the great scientific works of the late 19th century.’

His work earned him an appointment as the first director of the U.S. Geologic Survey in 1879. While living in Washington, D.C., he developed a close friendship with John Hay, future secretary of state, and historian Henry Adams, the grandson of John Quincy Adams.  With their wives, Clover and Clara, they called themselves the Five of Hearts.

After 20 months launching the USGS, Clarence King resigned and turned his attention to making a fortune in mining. He needed money to support his expensive lifestyle traveling, collecting art and clubbing in New York and Washington.  He dined at the White House, and he mixed with friends like  Frederick Law Olmsted and Bret Harte.

But the fortune he sought never materialized, and he borrowed heavily from his friends.

In 1887 or 1888, he met and fell in love with Ada Copeland in New York City. She worked as a nursemaid for a wealthy family in Manhattan. Born a slave in 1864, she had moved north from her home in Georgia to find work.

Clarence King made up an elaborate story for Ada. He was West Indian, he said, and had to travel a lot as a Pullman porter and steelworker. They married in the home of a friend on West 24th Street in Manhattan. Clarence King bought a house in Brooklyn and hired servants to run it. Eventually they had five children, four of whom would live to adulthood, between 1889 and 1897.

Their two daughters passed as white. One daughter married a white man but so feared giving birth to dark-skinned children she adopted two white babies. When the two boys entered the U.S. Army, they were classified as black.

Clarence King had to borrow heavily, mostly from John Hay, to sustain his expensive double lifestyle. Hay and his friend Gardiner apparently knew about it, at least toward the end of his life. 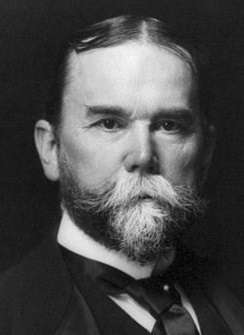 He suffered from bouts of malaria and depression, and in 1894 Clarence King traveled to Cuba (without Ada) for rest and relaxation. There he pursued geology and friendship with the natives, including insurgents who wanted to overthrow the Spanish government.

The trip to Cuba didn’t cure him, and he developed tuberculosis. In 1901 he kissed Ada goodbye and left for Arizona for a cure or death.

He got death. As he lay dying, he wrote Ada a letter revealing his true identity. He also promised her his friend John Gardiner would take care of her with $80,000 he had left with him.

For years, Ada King received checks in the mail from a mysterious benefactor. She assumed they came from John Gardiner. But she never found out what happened to that $80,000.

In 1933, nearing 70, she went to court to gain control of the money. She had received checks every year for 30 years, and only at trial did the name of the secret benefactor come to light: John Hay, then his widow, then his son-in-law, Payne Whitney.

She lost her case, and the checks stopped.

Ada managed to live comfortably enough in a house in Queens for another 30 years. On Aug. 28, 1964, she watched on television as another King delivered a famous speech on the steps of the Lincoln Memorial.