What was it about Ellen Robbins that inspired people to play practical jokes on her?

She made a good living as a flower painter in the 19th century. Her gorgeous botanical watercolors sold well, in bound books and in frames. She grew up in shabby gentility, helped along by her well-to-do family and friends. Summers she spent in fashionable resorts, winters in her Beacon Street studio. Artists more high spirited than she frequented those places, which may explain why Ellen Robbins was the butt of so many jokes. She was prim, temperate, careful. She preferred nature to the social ramble, and she didn’t like displays of wealth, which she considered vulgar.

Toward the end, though, Ellen Robbins got a good laugh on everyone else.

She was born in 1828 in Watertown, Mass., the youngest of seven children. Her father owned a factory, but his business failed and he died when she was two.

She described herself as a plain, sickly child with a lame foot. She grew up poor, but with prominent neighbors and cousins—Maria White, who married James Russell Lowell, and Supreme Court Justice Benjamin Robbins Curtis were both cousins. Her relatives also included a leading family of Watertown, the Thaxters, through whom she would discover the artists’ colony on the Isles of Shoals. As a child, she loved to paint. As the youngest, her sisters played jokes on her. They told her sugared almonds were spiders, which she believed. When presented with the treat, her sisters held out their hands for her almonds, which she gave them.

She attended the School of Design in Boston on the suggestion of her cousin, William Abijah White, an abolitionist and friend of Frederick Douglass. Then, needing to support her family, she got a series of jobs trying to design prints for textiles., For a time she worked at the Merrimac Printworks in Lowell, Mass., and at the Manchester Printworks in Manchester, N.H.

But she never got the hang of it, so she gave up and went home to Watertown. There she attended Stephen Salisbury Tuckerman‘s School of Design, which taught her what she needed to know about watercolor.

She excelled at painting watercolors of flowers, and decided to create books of spring flowers as they came. Each book had 20 paintings and sold for $25. Here having wealthy friends and relatives paid off. Cousin Hollis Hunnewell bought one for another cousin, a countess living in Paris. Philanthropist Mary Tileston Hemenway bought another.

“I now began to feel my good fortune had begun,” she wrote. Ellen Robbins in her studio, photograph by J. Appleton Brown

She then contributed a watercolor of autumn leaves to an exhibit of amateur paintings. Several people who liked her paintings asked her to give lessons, and so she took a class of seven students. Ellen remembered how Susan Cabot Lowell Sohier brought a melon basket filled with flowers to paint, a Herculean task.

Eventually she began giving private lessons She continued to attract pupils, and after many years she had seven classes a week, at $150 a class. Her students came mostly from Boston’s old moneyed families.

“In my classes, when those came, I lived for two hours each day in the fashionable world; and after hearing of balls and parties, the rest that followed in my simple home was most grateful,” she wrote.

In addition to Boston’s elite, Ellen Robbins had entree to an expatriate community of American artists in Rome. One of its members, sculptor Harriet Hosmer, had been a close friend since childhood. Hosmer had a relationship with the leader of that expatriate group, the cross-dressing actress Charlotte Cushman. When Cushman was performing in Boston, she visited Robbins’ studio and gave her tickets to her shows. She also gave her a recipe for shampoo that supposedly thickened hair. But the shampoo had red lavendar as an ingredient. When Ellen used it to wash her mother’s hair, it turned pink. 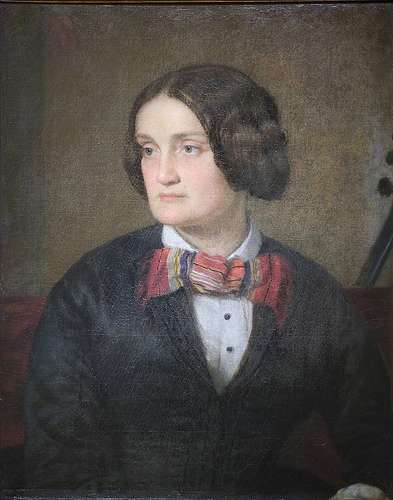 Another member of Cushman’s group, sculptor Margaret Foley, suggested Ellen sell her paintings through a Summer Street gallery eventually known as Doll & Richards. The gallery accepted her work, which sold out in a matter of weeks. Henry Ward Beecher was her biggest customer.

She took a studio at the corner of West and Tremont streets in Boston, later at 6 Beacon Street. There she made friends with John Appleton Brown and his wife, who had a studio next to hers.

She kept boxes of butter and sausage on the window ledge overlooking Beacon Street. One day she got a postcard from her landlord remonstrating her for putting food on the window ledge. She went next door to share her indignation with Appleton Brown, who made a show of sympathizing with her. But then his mouth twitched and she realized he had sent the postcard.

Reflecting on her success, she wrote, “My pictures were in great demand, and everything seemed to help me, for I was almost alone in the painting of flowers, and had relatives who were interested in my success, helping in a financial way.”

Another cousin, Henry Durant, who founded Wellesley College, hired her to paint a frieze at Wellesley (now gone).

She then built a studio in Bar Harbor, where she sold her flower paintings for many summers. But Bar Harbor began to attract wealthy swells, so she changed summer venues to the Isles of Shoals off the coast of New Hampshire and Maine.

There at her family’s hotel, poet Celia Thaxter hosted many artists and literati of the day. Some of them enjoyed playing practical jokes on Ellen Robbins. One night they sneaked a parrot into her bedroom.

Thaxter’s granddaughter remembered how the high-spirited Hassam played another joke on her.

Childe Hassam and Appleton Brown greatly annoyed a most temperate fellow artist, Levi’s cousin Ellen Robbins, by sneaking into her studio and filling her Franklin stove with empty champagne bottles. She was not amused when, the next damp day, she tried to light her fire and was choked by smoke. In 1873, she had saved enough to go to Europe with her sister. Again, a wealthy friend helped her out. Two days before she sailed, John Cummings, a wealthy banker, walked into her studio and handed her a letter of credit for a thousand dollars. He told her he wanted her to see Switzerland and Germany.

In London she befriended May Alcott, whose sister Louisa May, had written the blockbuster children’s novel, Little Women.

Ellen Robbins Gets the Last Laugh

Back home in Watertown with her sisters, Ellen, then in her 65th year, fell gravely ill. As she lay in her sickbed, the Young Men’s Republican Club gave a dinner in town. Toward the end of the dinner, the Episcopal minister made some remarks, and ended by pointing to some flowers on the table. He said they reminded him of Miss Ellen Robbins, who painted such realistic flowers. He then added that “she is lying very ill at her house tonight.”

The next day, Ellen’s sister Martha ordered a sewing machine from a man who also worked as an undertaker. He delivered the sewing machine in his undertaker’s wagon. A Mr. Hartwell, who worked in the paper mill nearby, happened to look out the window just as the wagon left the house. One of his workmen had a sister who boarded at the Robbins’ house, and he told Mr. Hartwell Ellen would be the one taken away by the undertaker. Mr. Hartman went to tell the minister, who stopped by to pay a condolence call. Startled when he saw Ellen on the sofa embroidering, he said he was pleased to see her looking so well. A stream of visitors followed the next day, all commenting on how happy they were to see Ellen looking so well.

A neighbor, Miss Mary Fitch, wanted to attend her funeral. Mary’s sister heard that a funeral would take place the next day at 2 p.m., and assumed that meant Ellen Robbins would be laid to rest. Mary went to the funeral service, and viewed the remains – of a bald old man wrapped in a shroud. “Oh, how changed,” she said. She soon figured out she’d gone to a stranger’s funeral.

Ellen Robbins lived another 12 years, dying at the age of 77.

With thanks to Reminiscences of a Flower Painter, parts I and II, by Ellen Robbins for the New England Magazine, Vol. 14, 1896. This story last updated in 2022.