The Boston Beaneaters were playing the Baltimore Orioles at the South End Grounds on May 15, 1894, when a fan lit a cigar in the right field bleachers and dropped the match through a crack. 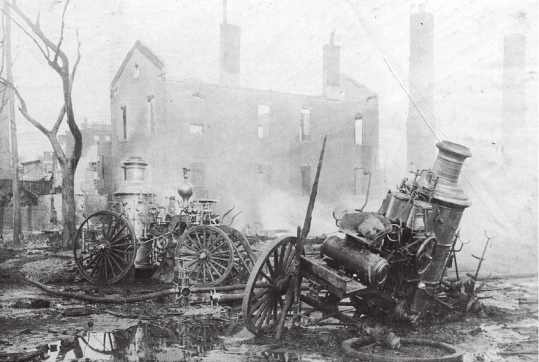 That was the version of the story accepted by most. Another version blamed ‘some small Roxbury boys’ who ‘set themselves up as rivals to Mrs. O’Leary’s cow.’

Whatever the case, a pile of sawdust and timbers was set on fire at 4:10 p.m. Just then the Beaneaters’ Jimmy ‘Foxy Grandpa’ Bannon ran out to play right field, saw the fire and tried to stamp it out with his feet.  That didn’t work, so he tried his cap. A fierce gust of wind caught the flame and spread it into a wall of fire. Bannon ran for help. East of the ball field was a crowded neighborhood of old wooden one- and two-story tenement homes. The fire quickly spread to houses on Berlin Street, along Walpole toward Tremont, igniting houses on Walpole, Cunard, Burke and Coventry streets. One of the houses destroyed belonged to groundskeeper John Haggerty, who led fans to safety and then ran to the nearest fire house to alert the fire department at 4:22.

Fire companies found no hydrants near the ballpark. They lost precious moments stretching long lines of hose.  A second alarm was struck at 4:25, a third at 4:42 and a fourth at 4:51.

In one hour, 12 acres burned, 200 buildings destroyed, and 1900 people were left homeless. The fire had spread so quickly they didn’t have time to save their possessions. No one died and injuries were minor.

The South End Grounds were quickly rebuilt, reopening on July 20, 1894, with a game against New York. Until then, the Beaneaters played their home games at Congress Street Grounds.

With thanks to Boston’s Fire Trail: A Walk Through the City’s Fire and Firefighting History by the Boston Fire Historical Society and Boston’s Ballparks & Arenas by Alan E. Foulds. Map of the burned buildings