The Great White Hurricane of 1888 struck on the night of March 11 and continued furiously for two days, dumping as much as 60 inches of snow on parts of the Northeast. One of the worst blizzards in U.S. history, it killed 400 people and paralyzed the East Coast from the Chesapeake to Maine. 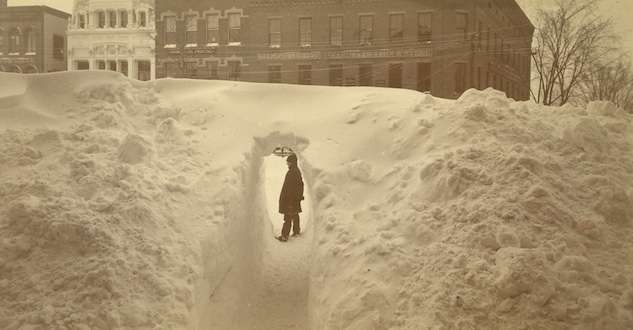 Drifts left by the Hurricane of 1888 in Northampton, Mass. Smith College Archives.

The huge drifts made roads impassable. Railroads shut down and streetcars abandoned.  The storm wrecked 200 ships and 100 seamen were lost at sea. Horses and cattle died, trees fell, barns collapsed and people had to stay in their homes or hotels for days. The unlucky ones had no milk, no meat, no coal. Shortages forced mothers to pay 50 cents for a quart of milk when they earned $2.50 a week for 11-hour days.

Only three months earlier, the New England Hurricane had devastated the East Coast. It took more lives and did more property damage than the Great White Hurricane of 1888. But for the people who lived through both, the second storm seemed worse.

Art Botsford worked in a clock factory when the Hurricane of 1888 hit the town of Thomaston, Conn. Years later, on Dec. 19. 1938, he sat down with writer Francis Donovan of the Works Progress Administration and reminisced about the storm of 1888.

Saturday was a beautiful spring day, Botsford recalled, but it rained on Sunday. By nightfall the rain turned to snow. On Monday morning, people went to work or school but soon they were sent home.

Art Botsford went to the clock factory that morning, but returned home at lunchtime. He struggled through snow up to his waist, unable to see 10 feet in front of him. Two of his co-workers, Warren Westwood and his son-in-law Bill Woods nearly died trying to get home to Harwinton, Conn., about 10 miles away:

They bought a snow shovel, and they said by God they’d get through. They got stuck in a big drift miles from home. One of them got the horse out and got on his back and the other took hold of the horses’ tail. They hadn’t got very far this way when the horse dropped dead.

The two men plodded on, recalled Botsford, making their way the best they could by what landmarks they could recognize. They climbed over stone walls and dead trees in the deep snow, exhausting themselves. Botsford continued,

You heard how people get when they’re in that condition. Westwood wanted to lay down and rest. But Woods, his son-in-law, he pinched him and slapped him, made him keep on his feet.

… They made their way to the house at last and fell up against the door and Mrs. Woods opened it and dragged ’em both inside. They was both in bad shape. Had their fingers and ears and nose and their chins frozen. It was three weeks before either of them came to work again.

In Northampton, Mass., an unidentified Smith student wrote to her father about walking home in the hurricane of 1888: Children died trying to get home from school and adults perished in snowdrifts higher than their heads. Telegraph boys tied wires around their waists so they could be pulled out of the drifts. In Springfield, Mass., a man named Edwin F. Leonard bent down to pick up a hat in a snow bank and found a little girl buried in it. In Stamford, Harry M. Capper, who lost a leg in the Civil War, was found nearly exhausted in a snowdrift near a store on Monday. Rescuers carried him home, and he recovered.

Neither the fury of the wind nor the fall of the snow paused at all on Monday, day and night,  reported the Stamford Advocate. Eleven-year-old Walter Crittenden of Wethersfield, Conn., also wrote about the hurricane of 1888 — in his journal:

Monday, March 12 _ A very stormey day, wind began to blow hard early in the morning.  Children were sent home from school at half past 9.  Pappa came home looking like a snow man, books in the pocket.
Tuesday, March 13 – The storm crept on with all its fury.  Fred and I made some snow shoes.  Their wasn’t school.
Wednesday, March 14 – Storm ended today.  School let out at half past 9.  Badly drifted.

Telegraph lines came down, leaving people isolated and in the dark.

“All people could do is wait for the storm to end while wondering and worrying about what was happening in the rest of the world,” Walter Crittenden recalled 80 years later.

Trains loaded with passengers stayed stuck for days.  People dug tunnels to get into or out of their houses, and in rural areas like the Berkshires people couldn’t leave their homes for two weeks.

Art Botsford remembered how store supplies of fresh meat first ran out, and then the canned meat and then finally the salt meat. Food was scarce, and suppliers who sold to the highest bidder rather than their steady customers never got those customers back, he recalled. Seven days after the storm began,

I went to church the next Sunday, the sun was shinin’ nice and bright, and over at Burr Reed’s market in the center, just as church was over a sled owned by Ralph N. Blakeslee of Waterbury drove up with a supply of meat. The butchers and the meat cutters was in church – they was more church-goin’ people then than there is today – and they went over and opened up the store and the people flocked in and they began to sell meat – Sunday or no Sunday.

Clearing the snow was a huge challenge in the days before snowplows.  Men dug out with snow shovels or attached rollers or plows to teams of horses or oxen.

In Stamford, Conn., 15 men and four horses hitched to a lumber box couldn’t open a road. The town hired five yoke of oxen and a force of laborers with shovels worked through the day. Finally they cleared the way for wagons carrying groceries, milk and coal.

John Whitaker Watson wrote a famous poem in that era called Beautiful Snow. It lamented the death of a prostitute (a popular topic back then): Store of E.S.Webb in Stamford, after the hurricane of 1888. Stamford Historical Society

O the snow, the beautiful snow!
How the flakes gather and laugh as they go!
Whirling about in its maddening fun,
It plays in its glee with every one.
Chasing, Laughing, Hurrying by,
It lights up the face and it sparkles the eye;
And even the dogs, with a bark and a bound,
Snap at the crystals that eddy around.
The town is alive, and its heart in a glow,
To welcome the coming of beautiful snow.

Hartford residents hanged Watson in effigy and pelted him with snowballs.

Bitter cold set in after the hurricane of 1888 and the snow didn’t melt for months. Great quantities of the frozen stuff were thrown off wharves or carted to town greens. Botsford remembered a mountain of ice on New Haven’s green, which didn’t melt until June.

Not everyone hated the Great White Hurricane of 1888. In Springfield, the Hotel Cooley filled with revelers stuck in the storm. For days “the knights of the cork” sang and drank. Those who stayed at the Cooley during the storm formed The Association of ’88 and met annually for years afterward.

Stuck Inside of NYC

Connecticut residents Mark Twain and P.T. Barnum couldn’t leave their hotels in New York City.  Twain detested the hurricane of 1888 because it  prevented him from meeting his wife Olivia. So on March 10, he wrote her a letter lamenting their separation. In it, he wrote,

…a blizzard’s the idea; pour down all the snow in stock, turn loose all the winds, bring a whole continent to a stand-still: that is Providence’s idea of the correct way to trump a person’s trick.

With thanks to the Library of Congress, Manuscript Division, WPA Federal Writers’ Project Collection; Wethersfield Historical Society; and the Stamford Historical Society. This story about the hurricane of 1888 was updated in 2022.