When Isabella Stewart Gardner wanted to meet Claude Monet, her first thought was to wrangle an invitation from Lilla Cabot Perry. 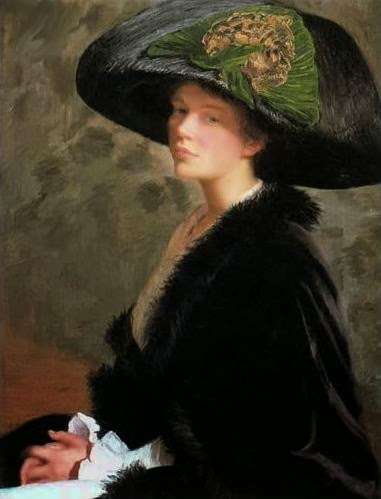 Lilla, a Boston artist, lived abroad with her husband and three girls. She moved in the same social circles as Gardner, a natural intermediary for Gardner, an avid art collector.

She was born Jan. 13, 1848 into a Boston Brahmin family. Her father, Dr. Samuel Cabot III, was a prominent surgeon. Her mother, Hannah Lowell Jackson Cabot, was a cousin to James Russell Lowell. Family friends included Ralph Waldo Emerson and Louisa May Alcott.

In 1874 she joined another prominent family when she married Thomas Sergeant Perry, grandnephew of U.S. Navy Commodore Matthew Perry. He was a Harvard professor described as ‘the best read man in Boston.’ Lilla Cabot Perry began painting at the age of 36 years. She may have gotten interested in art through her husband’s brother in-law John LaFarge, an artist famous for his stained glass windows.

The Perrys had family money, but they weren’t rich. They lived abroad for years, partly because it was cheaper to live in Europe and partly to escape Boston society, which they found stultifying. They lived with their three daughters mostly in France from 1887 to 1909.

For nine summers they stayed in a small expatriate art colony with American artists such as Theodore Robinson and John Leslie Breck. Lilla became good friends with Giverny’s most famous resident artist, Claude Monet, as well as with Camille Pissarro and Mary Cassatt.

She began to paint like Monet, creating landscapes with impressionist brushstrokes and a pastel palette.

She was also inspired by Japanese art when her husband got a teaching job in Japan from 1897-99. When she was back in Boston she promoted Monet’s work, but had more luck with her own. Seven of her paintings drew raves at the 1893 World’s Columbian Exposition in Chicago.

Word got round Boston of the Perry family’s connections in France, and their friends and acquaintances tried to take advantage of them. In November 1906, Isabella Stewart Gardner visited France and badgered Lilla for a meeting. Suspecting Gardner was just using her, Lilla put her off.

Finally they ran out of excuses to avoid her and Lilla brought the letter to Monet. He groaned and said, “Well, my friend Pissarro is in trouble…I’ll see if I can’t sell some of his paintings for him.”

Gardner didn’t buy a Pissaro, but she did manage to meet Claude Monet. As her inheritance dwindled, Lilla Cabot Perry had to rely more on portrait paintings for income. She continued painting landscapes at her summer home in Hancock, N.H., until her death on Feb. 28, 1933.

With thanks to The Boston Cosmopolitans: International Travel and American Arts and Letters by Mark Rennella. This story was updated in 2022.