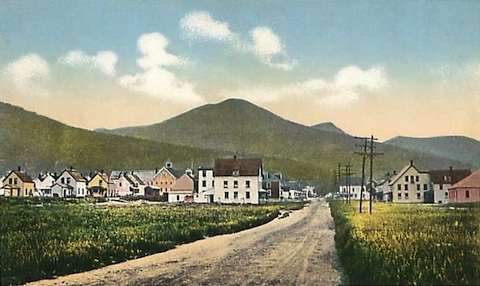 He then built two towns, Lincoln and Zealand. He also built the region’s first steam-powered sawmill on the Ammonoosuc River, paper and pulp mills, the Lincoln House hotel and 500 miles of logging railroads.

He and his sons ruled Lincoln autocratically. They owned every building but one, and served as postmasters, assessors, selectmen, tax collector and judges. They also hired and fired the schoolteachers.

Henry printed on the back of passes issued to workers the following: “Lincoln, N.H., is one mile from the town of North Woodstock on the Concord & Montreal Railroad. It is the headquarters of the J.E. Henry & Sons Lumber Co., one of the largest firms in the state. A good man can find work all year. A poor man better not go there, as such men are not wanted.” The timber baron did not escape criticism.

He was called the ‘Grand Duke’ of the ‘Duchy of Lincoln.’ Newspaper editors called him a ‘wood butcher,’ his logging practices ‘frightful slaughter.’ He was targeted for leaving the tops and branches of trees not used for pulp or lumber – ‘slash – which caused forest fires.  In 1903, 80,000 acres burned; the next year, 200,000 acres burned, the next, 35,000 acres burned.

The White Mountain Echo complained, ‘from what was a little over a year ago a forest wilderness, now rises a cloud of smoke from a sawmill, whose hungry teeth are bent on destroying … the noble forest growth.’

James E. Henry died in 1912, worth $10 million — $10 million more than he was born with. The year before he died, though, the reaction his clear-cutting inspired a law to protect the forests – the Weeks Act, sponsored by his fellow Granite Stater, Sen. John Weeks.  In 1918, the White Mountain National Forest was created, ultimately preserving 750,000 acres of trees.

During his lifetime, the timber baron had another forest-products business that inspired a story he loved to tell: charcoal making. In the early years of the United States, woodsmen in Northern New England burned huge quantities of wood to make pit-charcoal. Eventually, brick kilns replaced the pit method of charcoal making.  Henry and his sons set up kilns in the clear-cut areas and made large amounts of charcoal, then used for heating and cooking in city slums. In Tall Trees, Tough Men, Robert Pike recounts how James E. Henry was ready to leave Zealand and move to Lincoln. He owned an entire mountain he wanted to sell. A hotel company planned to build a resort – the Mount Washington Hotel — facing the timber baron’s mountain. Henry then offered to sell the mountain, but he asked too much and the hotel company refused.

“All right,” said Henry. “Then I’ll put up some charcoal kilns and burn every tree in sight.” He sent in a crew of men to start cutting trees and hauling bricks. The hotel company feared a clear-cut mountain covered with smoky charcoal kilns would spoil their venture. It paid the timber baron what he asked for.

Henry then took his money and left, quite pleased his bluff succeeded.