Phone spying is catching attention these days as the details of the U.S. National Security Agency’s massive use of phone data becomes public one leak at a time. The NSA, to almost no one’s surprise, is using its phone spying capabilities to keep tabs on Americans, looking for terrorists who might be up to no good.

The urge to gather the data that phone spying provides is nothing new. Throughout history, governments have used the same principles in searching out their enemies. What might phone spying have looked like around the time of the American Revolution? 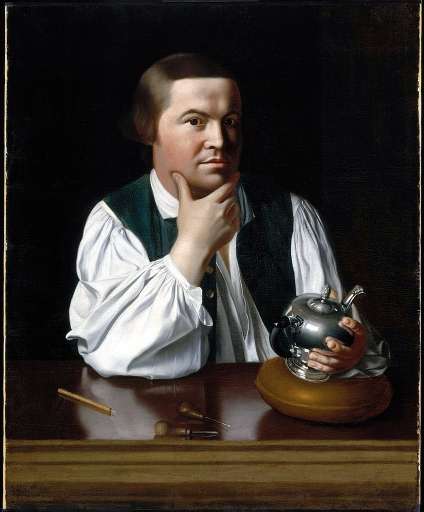 Blogger Kieran Healy gives us some idea in his humorous (and somewhat disturbing) look at how phone spying might have played out in the days leading up to the American revolution by mapping individuals to organizations and events that were hostile to continue British rule in New England:

The analytical engine has arranged everyone neatly, picking out clusters of individuals and also showing both peripheral individuals and—more intriguingly—people who seem to bridge various groups in ways that might perhaps be relevant to national security. Look at that person right in the middle there. Zoom in if you wish. He seems to bridge several groups in an unusual (though perhaps not unique) way. His name is Paul Revere…

From a table of membership in different groups we have gotten a picture of a kind of social network between individuals, a sense of the degree of connection between organizations, and some strong hints of who the key players are in this world.

For a more scholarly look at the conclusions that can be drawn from big data of the colonial era, visit

The Other Ride of Paul Revere: The Brokerage Role in the Making of the American Revolution by Shin-Kap Han.