He was a liberal Republican who supported the New Deal. He stumped throughout New Hampshire at church dinners and Grange halls on behalf of the “Townsend Plan,” which became Social Security. In 1941, President Roosevelt appointed him U.S. Ambassador to the United Kingdom to replace Joseph P. Kennedy, who wanted to appease Hitler rather than fight. In London John Winant fell under the spell of Winston Churchill and his family. He worked tirelessly with the prime minister to support Britain during the war. When news of Pearl Harbor broke, Winant and Churchill danced around the room together, excited by the inevitable entry of the United States into the conflict.

He visited Churchill nearly every weekend at his Chequers country estate. Winant was fond of all the Churchills, and they of him.

Sarah Churchill visited Chequers every weekend, too, drawn to her powerful father and the great events unfolding around him.

Sarah Churchill was a tense, conflicted aristocrat who tried to maintain separate identities. She was the devoted daughter of Winston Churchill and an independent woman. Sarah pursued careers as an actress and as an interpreter of aerial photographs for the Women’s Auxiliary Air Force.

She fell in love with John Winant during their weekend visits to Chequers. They spent as much time as they could together. The lovers danced after dinner at wartime conferences in Cairo and Teheran, and saw each other in London, where her apartment was a five-minute walk from the U.S. embassy in Grosvenor Square.

Terrified of scandal, they tried to keep the affair quiet. Some people, including Winston Churchill, suspected them. Years later, Sarah referred to this ‘old love affair which my father suspected but about which we did not speak.’ Winston Churchill and Sarah in Cairo, 1943

She was 25 years younger than Winant, and married to radio comedian Vic Oliver. They were separated, but she kept it secret from all but a few intimates. She even appeared in public with Oliver.

Winant had a wife and children at home in New Hampshire.

John Gilbert Winant, known as Gil to his friends, was born in New York City to wealthy parents on Feb. 23, 1889. He was sent to St. Paul’s School in Concord, N.H., and then to Princeton. A poor student, he didn’t graduate.

He taught history at St. Paul’s and was elected as a representative to the New Hampshire House of Representatives in 1916. When the United States entered World War I, he joined the United States Army Air Service, trained as a pilot and commanded the 8th Aero Squadron in France as a captain. He returned to New Hampshire politics after the war. In 1919, he married Constance Rivington Russell, a New York socialite. They had a daughter and two sons, but she loved Paris and parties, he loved Concord and social reform. The marriage was unhappy. Winant often sat up all night, brooding about how to make things better.

Winant was elected governor in 1925, 1930 and 1932, New Hampshire’s first three-term governor. Though he suffered financial losses during the Great Depression, he often gave money to poor people outside the Statehouse. He told the Concord police to buy breakfast for homeless people and send him the bill. As governor he implemented a minimum wage, public works projects and welfare aid.

Roosevelt appointed him to the International Labor Organization and then to the Social Security Administration. In 1941, Roosevelt named him ambassador to the United Kingdom.

Winant earned the trust and affection of the British people on his arrival. “I’m very glad to be here,” he said. “There is no place I’d rather be at this time than in England.” The comment made front-page news in war-torn Britain, which welcomed the change from the appeaser Kennedy.

Had John Winant not been married, he would have been ideal for Sarah Churchill –an older man, idealistic, handsome, lonely and clearly needing her, wrote John Pearson in The Private Lives of Winston Churchill. She was gay, tactful and amusing, and cared deeply for him. 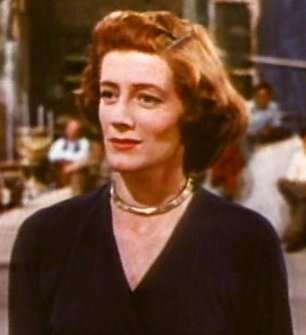 Sarah Churchill in Royal Wedding, one of her most successful films.

It wasn’t easy keeping their romance secret, as the entire British public could recognize Winant on the street. Their need to be secretive strained their relationship. Winant also worried about his son John, a bomber pilot captured by the Germans and threatened with execution. John Jr. survived, but was  traumatized by his experience.

At the end of the war, Sarah Churchill and John Winant had to come to a decision about their future. She had divorced her husband, but saw no future in her relationship with Winant. He did.

Winant resigned his ambassadorship in 1946, but didn’t go home. He rented a house in Mayfair, hoping Sarah would wait for him to get a divorce. She refused to talk about marriage.

He was broke, sad and lonely, happy only when reminiscing about the past.

She decided to assert her independence on the stage. Her agent found her a part as the tragic, aristocratic heroine in a film version of the Italian novel Daniele Cortis. She went off to Rome.

John Winant, heartbroken, gave up and returned home a few months later. There he faced further disappointment. He had agreed to write a three-volume book about his war experiences, but didn’t like what he had written. He viewed his career prospects as bleak.

On Nov. 27, 1947, the day his first book was published, John Winant climbed the stairs of his large white house on Pleasant Street. He went into his son’s bedroom, took out a revolver and shot himself.

His death devastated Sarah Churchill. She had spoken to him on the telephone shortly before he killed himself and blamed herself for it. She said she brought nothing but unhappiness to the people she loved. Eventually she would fall in love and marry again, to the 23rd Baron Audley, and have a successful acting career.

John Winant wanted to be buried on the grounds of St. Paul’s, but because of his suicide he was buried at Blossom Hill Cemetery instead. In 1968, officials had his casket exhumed and moved to St. Paul’s. He had written his own epitaph:

Doing the day’s work day by day, doing a little, adding a little, broadening our bases wanting not only for ourselves but for others also, a fairer chance for all people everywhere. Forever moving forward, always remembering that it is the things of the spirit that in the end prevail. That caring counts and that where there is no vision the people perish. That hope and faith count and that without charity, there can be nothing good. That having dared to live dangerously, and in believing in the inherent goodness of man, we can stride forward into the unknown with growing confidence.

In 2009, Winant’s son Rivington donated 85 acres near St. Paul’s to the City of Concord for a public park.

On June 30, 2017, New Hampshire installed a memorial statue depicting John Winant across from the Statehouse. The John Winant Memorial Committee raised the funds for the statue.

With thanks to Citizens of London: The Americans Who Stood with Britain in Its Darkest, Finest Hour by Lynne Olson. This story was updated in 2022.