Springfield, Mass., and the rest of Western Massachusetts, might well belong to Connecticut today if William Pynchon had not decided to leave Connecticut and join with Massachusetts in an acrimonious dispute in 1637.

William Pynchon, one of the original founders of the Massachusetts Bay Colony, arrived with John Winthrop in 1630. Rather than staying by the coast, however, Pynchon moved inland. He bought land in what was called Agawam from the American Indians and named it Springfield after his home in England.

William Pynchon marched somewhat out of step with his Puritan comrades in more than just the fine points of religion. He had a more pragmatic approach to business than a typical Puritan. He believed in trading with the local Indians, not fighting with them.

As one of his first acts when coming to Springfield, he made a deal with the local Indians. He procured land and compensated them for it. Then he made agreements to allow the Indians to continue to use the land for hunting and other purposes. Further, he agreed to restrict his pigs on the side of the river where the Indians grew corn, so they couldn’t invade their cornfields. Puritans burning the book by William Pynchon, The Meritorious Price of Our Redemption.

Pynchon’s fellow settlers in Connecticut and Massachusetts had more fractious relations with the Indians — perhaps because they didn’t live among so many of them.

Springfield was controlled by a government made up of the river towns of Hartford, Windsor, Wethersfield and Springfield. Then that government declared war on the Pequot Indians.

This left William Pynchon in a precarious position. Springfield, which only had a handful of settlers, could expect no defense in case of Indian attack. Nevertheless William Pynchon received a war tax bill. When he balked at paying, the authorities at Hartford hauled him before them.

In the spring of 1638, when the snow receded enough for William Pynchon to reach Hartford, he answered the charges (and probably paid the tax). While there, the local government gave him a monopoly on the fur trade in Springfield. The news did not sit well with Pynchon. He would have had a virtual monopoly on it anyway, and the new designation meant he had to pay a tax on every pelt he bought from Indians. 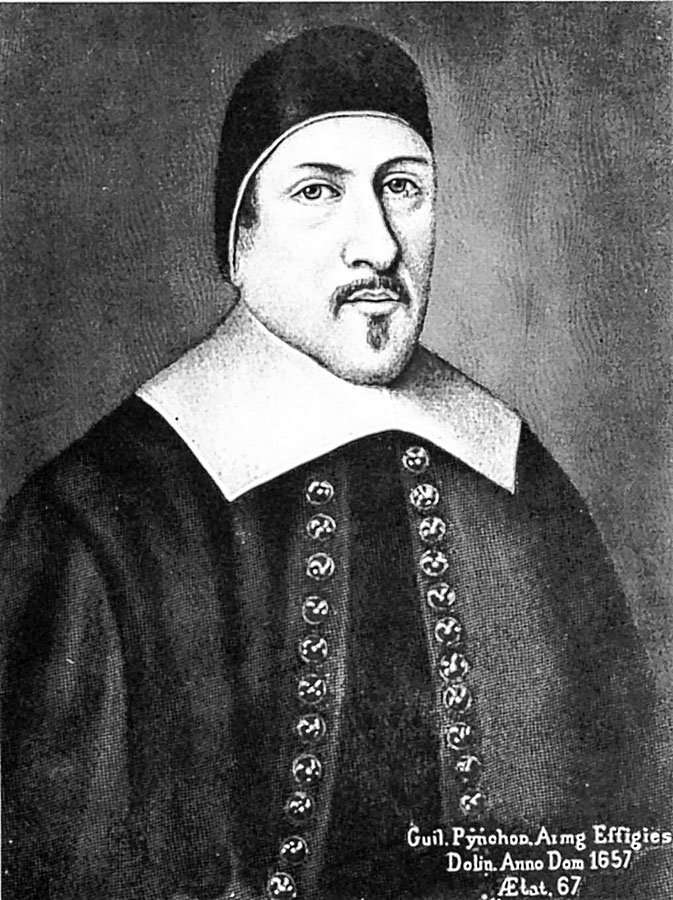 The river towns to the south of Pynchon also had a food shortage that year, the war having limited the colony’s ability to focus on growing corn. So the magistrates directed Pynchon to procure 500 bushels of corn from the Indians near Springfield at five shillings per bushel. What Pynchon discovered, he would later report, was that the Indians wanted eight shillings. He was not authorized to pay that price.

The next move by the river towns was to send another man, John Mason, to Springfield to procure the corn. Mason was a hero to his Connecticut countrymen, having led a deadly rout against Pequots at Mystic the year before. The Indians did not hold him in such high esteem, though they were not Pequots.

According to William Pynchon, he tried to broker a deal between Mason and the Indians, but the Indians would not part with corn at the price offered.

Returning to Hartford, John Mason charged that William Pynchon held up any deal in hopes of profiting himself. The Puritan governments believed that the public good outweighed private profit and fixed the prices of essential commodities. To their thinking, the price for corn should be, if anything, lower than it had been in the past.

The Hartford authorities again summoned William Pynchon to answer charges of “unfaithfull dealing in the trade of corne” and for ignoring his duties as a magistrate of the colony. They fined Pynchon 40 bushels of corn for failing to deliver the Indian corn at the price of six shillings per bushel. The river towns then sent Mason again to Springfield, this time with a band of armed men, and threatened the Indians if they did not sell corn. The Indians agreed, but at a price of 12 shillings per bushel.

Despite Pynchon’s protests, the Connecticut authorities went so far as to write to the church at Roxbury to undermine his reputation there. Later that year, the leadership of Massachusetts and Connecticut gathered to settle questions over the boundary of the two colonies,. Then, William Pynchon declared Springfield belonged to Massachusetts.

Despite some protests from the river towns, Massachusetts officially took Springfield  by 1642. Pynchon, meanwhile, did not live happily ever after in Massachusetts. He continued to chafe against Puritan practices and beliefs. In 1650 he published a religious tract — The Meritorious Price of Our Redemption — the first book banned in Massachusetts. Many would follow. (Read more about his banned book here.)

William Pynchon was accused of heresy. At the same time, the colonies were beginning to get whipped up over witchcraft. Sensing the dire mood, Pynchon gave title to his lands to his son. He departed for England in 1652, where he lived the life of a wealthy man for the next 21 years.

Thanks to: William Pynchon, Founder of Springfield; Proceedings of the Massachusetts Historical Society. This story was updated in 2022.